As you likely know by now, your transition into becoming a college student comes with a large variety of new responsibilities which are associated with adulthood and independence. If you are moving onto your college campus and living away from home for the first time, as I did during my freshman year of school, you will soon realize that you have acquired an extraordinary amount of freedom in your everyday decision-making. College is an incredible time in an individual’s life because it is during this period of learning that an individual grows into a self-sustaining being with the full ability to make their own choices, form their own opinions, and make judgements according to their own values, rather than those of their parents or other family members at home. During the first semester of my freshman year, the 2018 Midterm Elections were held in November, and I was determined to voice my own opinion on who the rightful Maryland representatives should be through Absentee Voting. This was indeed the first, but certainly not the last time I would be using Absentee Voting to cast my vote in local, state, and federal elections while I was attending Pace University.

It is no secret that college students are extremely busy people, and most likely the over-achieving students such as myself simply do not have the time to travel home to their polling locations to cast their votes physically in person. But this does not mean that full-time college students should be prohibited or barred from voicing their opinions in any election in which they would be able to vote in-person under normal circumstances. For example, one of the main factors that qualifies an individual as eligible for an Absentee Ballot is that they are enrolled in a university that is located out of their home state. This was my case exactly, because I was a resident of the state of Maryland while attending Pace University in Pleasantville, New York. When I recognized that the Midterms were quickly approaching back home in Maryland, I quickly realized that my full-time student athlete schedule would not allow me the chance to drive over eight hours (in total) to and from my polling place in one day. This is one of the many reasons that Absentee and Early Voting must be supported and made available to U.S. citizens who are not able to cast their votes in-person.

Without getting into politics, I simply wish to emphasize the importance of young people becoming involved in our democracy as quickly as possible, because the outcomes of each local, state, and federal election will absolutely impact the quality of our current and future lives. Applying for an absentee ballot was quick and simple – I simply typed “Maryland Absentee Ballot request application” into my browser and was brought to a reliable government website which allowed me to fill the paperwork out entirely online, and you must have your Driver’s License or a Government Issued ID present while completing this task. Additionally, if you are unsure of whether or not you are registered to vote in any U.S. elections, vote.org is a useful resource to inform you of your voter registration status. If you are not registered to vote, you’re in luck, because it is highly likely that your college will host voter drives and voting information sessions for students directly on campus, in order to encourage civic engagement among college students. Pace University was excellent in this field, as our school hosted the incredible nonprofit “Rock the Vote” which allowed my fellow students not only the ability to register to vote on campus, but even offered transportation services to and from the polls to students who did not have access to a car on campus.

I highly encourage you to become involved in civic engagement as much as you possibly can, and to vote in your local, state, and federal elections whenever you can. The more informed, caring, and involved you are in your community will lead to your own needs and values being represented by your government. As you enter into your first year of college, I challenge you to research the ballot for any upcoming elections you may participate in next, even if politics is not your major – we all have the right to elect our representatives, and make an informed decision on who you would like your next representative to be. You deserve to have your values and beliefs represented by your local and state officials, it’s never too late to become involved! You do not have to be an activist, but you should be informed about the world going on around you. 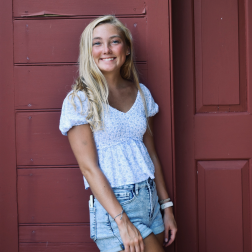 Meet the Author
Chloe Mayhew is a 2022 first-generation college graduate, recipient of a Bachelor’s Degree in Global Professional Studies with a concentration in Political Science from Pace University. She is currently preparing for an exciting gap year as a volunteer with the AmeriCorps National Civilian Community Corps (NCCC) program for 10 months in the Southwest Region of the United States, based in Aurora, CO. Volunteer, global citizen, human rights activist, world traveler, lifelong student. Read more about Chloe >