Recently I discovered the importance of the word “no.” It’s such a simple word that surprisingly becomes very difficult to use as you get older. More specifically, the word “no” adopts an air of forbiddenness if you are a person who tends to consider the feelings of others before your own. I was discussing this thought with my friend, who also happens to be a first-generation student, and she expressed how she often avoids the saying word “no” because of the anxious feeling that usually accompanies it. When I asked her why this word makes her so anxious, she responded by saying, “I’m afraid of how people will react when I say no to them.” I resonated so much with her feelings that I began to contemplate whether this is something that plagues us, first-generation students, exclusively due to the responsibility we often feel to our loved ones.

By definition, the word “no” is used as a negative response to a question. For example, “can you help me with my paper?”; “no, I cannot.” In my experience, the word “no” usually precedes an explanation for your statement. A lot of us feel like we have to justify our no’s to cushion the blow for the receiver. But what if I told you that the word “no” is a full statement and sentence in and of itself? As I’ve exercised the usage of my no’s, I’ve come to the realization that over-explanation is usually a sign of a lack of autonomy.

In the beginning, I always felt like I had to explain why I was saying no, but as I’ve become more acquainted with the word, I’ve realized that it's simply not necessary. If I could go back in time and give myself one piece of advice, it would be that the word “no” is rarely about them and always about you. At the end of the day, you can only be responsible for your thoughts and feelings. What good is a “yes” if it comes at the expense of your happiness, sanity, and peace? None.

Here’s some advice you can follow when you want to say no, but feel scared to:

All in all, saying “no” can be difficult for some more than others. When you feel like you’re about to bypass your no’s, remember to stop and reflect. As time passes, you’ll find that a no is just as good as a yes, and oftentimes serves you above all else. 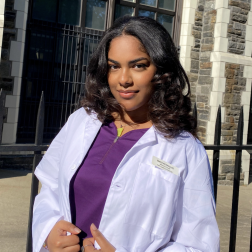 Meet the Author
Emely Rodriguez is a first-generation Afro-Latina who was born and raised in New York City. She is currently in her final year of undergrad at the Sophie Davis School of Biomedical Education. She has obtained a minor in African American Studies and is expected to complete her degree in Biomedical Sciences this upcoming spring. Read more about Emely >