Not everyone’s experience as a person of color is the same within academic or even professional spaces. However, the barriers that make navigating these spaces exceedingly difficult are almost the same. For example, occupying a seat in an environment where you are one or one of the only Black/Brown students present. There is this gut feeling that reminds you not to screw up, but it is not simply because you want to be the best version of yourself. It is because deep down you know you cannot be perceived as incompetent.… There are no second chances for you. You are lucky to even be here… right? Through internalizing the social pressures of “countering the narrative”, you either force yourself to work harder than your peers or break down under the pressure. Although most of us are used to being the “minority” in various spaces, we do not have to succumb to the subliminal messages that attempt to speak to our ability. Being referred to as “minority” not only minimizes our contribution in the areas that we actively take part in, but it confirms our status as less than. The term minority might seem like a harmless way to define the proportion of a specific population to the total population but, it is not always used in that context. The term minority is often used interchangeably with racial identifiers as if it is an inherent identity. The idea of race was already constructed as means to differentiate whiteness from the “other”. So, the term minority is yet another way to minimize and segregate people of color. Every time we are referred to as a minority, we are reminded of what we lack rather than all that we overcome daily to be where we are.

It is not a mere coincidence that how society views marginalized students, as a collective, correlates directly to our feelings of esteem and self-worth. A lot of how society depicts students of color will warrant non/POC, and even sometimes POC, to undermine our journey and underestimate our abilities. I think we have all heard someone somewhere mention that a person of color only received an opportunity because they were from a certain ethnic group. All of this translates into students of color developing imposter syndrome. Being constantly reminded, whether it be covertly or overtly, that you have not worked hard enough for your position in society results in feelings of unworthiness. Imposter syndrome is more than just feeling unworthy. It is believing that you are not competent enough to sit at the table and that by some sheer miracle you were given a seat. The most ironic part about this table is that most of the individuals already seated had their spots reserved long before you could even dream of sitting there. This syndrome is debilitating because it trains you to lose your voice and follow a narrative that was written by some outdated author. The worst part is that it never really goes away. It will pop up at the most inconvenient times… For example, when you start a new semester at college or even when you have a new idea that feels far-fetched.

I don’t think there is a way to truly rid yourself of imposter syndrome because of all the systemic and social priming we endure as people of color. However, there are ways to mitigate its effect on how you view yourself and what you believe you deserve. Personally, once I started my journey as a medical student, I struggled with understanding my imposter syndrome and anxiety. Over time, I started to identify my triggers and counter the negative feelings with some positive self-talk. For example, I feared speaking out in class because I thought that if I did not speak as eloquently as my peers, they would find out my secret: I was not as intelligent as they were. It took me years to debunk ideas that I created in my head about myself. Firstly, who says that I am not equally if not more intelligent than my peers. Secondly, no one is perfect… Being in school is about learning more than you knew the day before. Essentially, I would remind myself of all the wonderful things about myself and ask why I felt I was not deserving of a voice? At a certain point, those negative voices sound irrational, and you realize the only imposter is that silly little voice. Once you feel yourself giving in to the negativity of imposter syndrome, positive self-talk must come in and remind you of who YOU are. You will not think highly of yourself until you practice praising yourself daily. As students of color, we were not born into a social environment that affirmed our presence like our white counterparts. We have to take time to learn who we are and why we are so valuable.

Imposter syndrome is a real feeling, and it is okay to feel overwhelmed by it. The goal is to not allow it to define who you are and what you can do. Reminding yourself that you have a lot to contribute at every table and that your voice matters is the first step. Once you know your value and create your own narrative, there is no voice more powerful than yours. 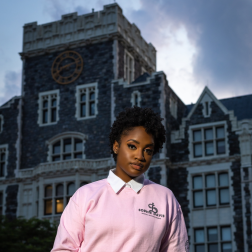 Meet the Author
Tiffany Lacroix is in her first year of medical school at the CUNY School of Medicine. She has acquired a degree in Biomedical Science with a minor in African American Studies. As an undergraduate student, she was the president of the City College chapter of the National Association for the Advancement of Colored People (NAACP). She was also vice president of a program dedicated to mentoring Black and Brown youth called You Can Too. Tiffany started a blog called Black Woman Empowered where she explores social justice issues, the plight of marginalized communities and discusses her journey as a Black woman pursuing a medical degree. She aspires to be an Obstetrician-Gynecologist not only to diversify the field of medicine but cater to the Black and Brown women who are dying disproportionately during childbirth. She aims to work towards mitigating the disparities within the medical field and act as a liaison between disenfranchised communities and the health care system. Read more about Tiffany >